So Mika's had several chiropractic appointments now. She's still very slightly lame, off-and-on, but there's been a gradual steady improvement. Her chiropractor told us that his job is mostly done (except for occasional adjustments, but not every two weeks anymore). What needs to done now is muscle work, according to him. So I've reinstigated daily massage for Mika, focusing on her shoulder muscles. I've also been doing FitPaws egg ball work with her almost every day, and have been taking her on regular walks. (Mika is one of those dogs who doesn't really enjoy walks, but I've been making them enjoyable for her by playing find-the-treats-on-the-ground games with her.)

Chillin' at this weekend's trial 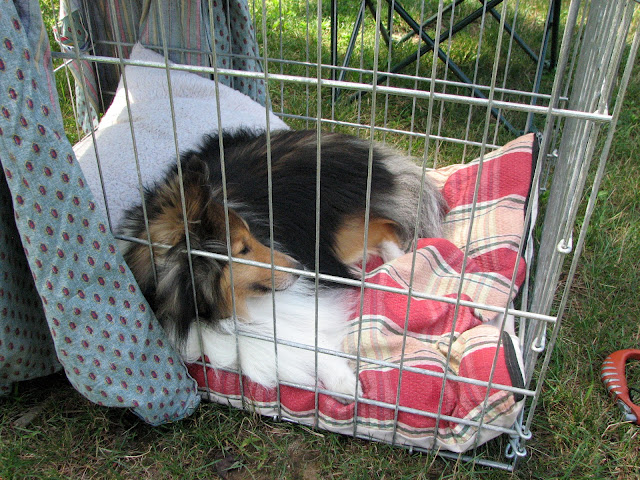 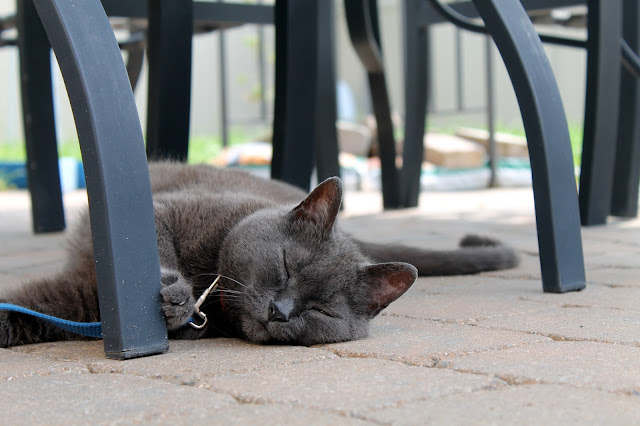 Shadow loves the summer because she can spend her days outside. She's somewhere between 18 and 19 years old now (my family found her as a stray long ago!) and she's still going strong.
Posted by Natasha at 3:28 PM 2 comments: 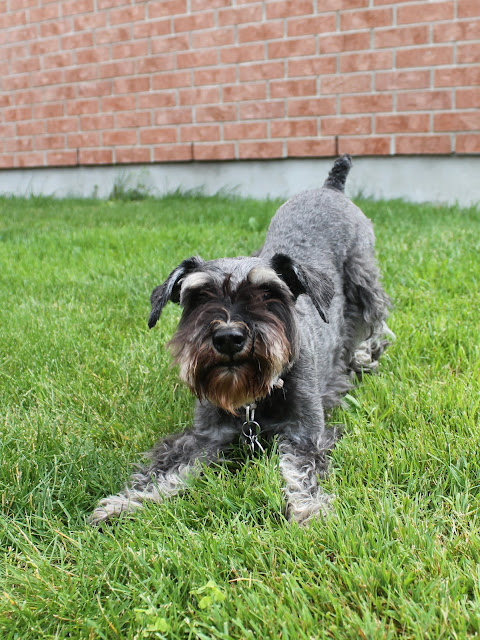 M offered this trick in the backyard while I was taking photos of her. It's one of her favourite tricks :)
Posted by Natasha at 7:47 PM 3 comments:

It's a good life!

Wall-e running in his new Julius K-9 IDC harness! (With the extra Y-belt attachment that I ordered.) 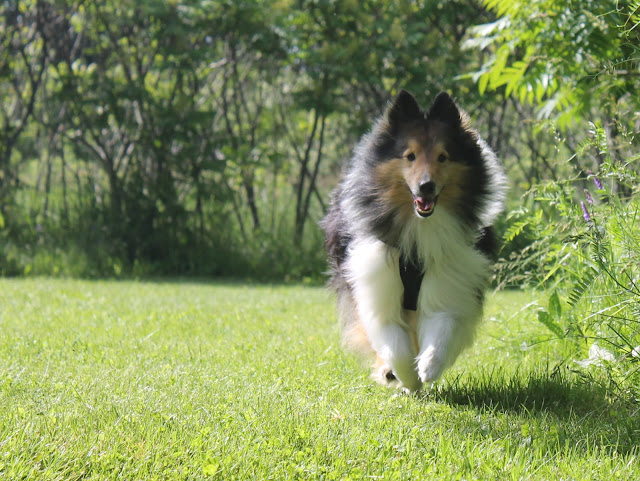 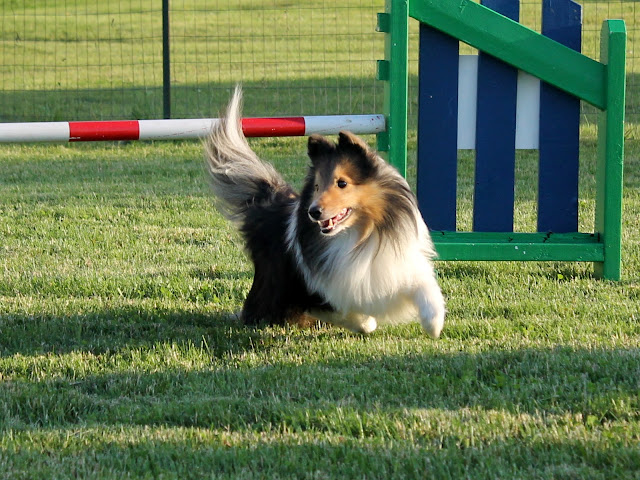 
On Wednesday Mika had her first chiropractic adjustment (as recommended by our regular vet when I brought her in for very slight lameness).

I literally just copied/pasted these rough notes I made on a word document on my computer, so they're just random/unedited jot notes:

Her body's been doing a lot of compensating, and rearranging as a result of compensating. The chiropractor adjusted 18 different areas, and he said eight of these areas are of concern. We'll be back in two weeks and see how it goes from there; she'll probably need 4-6 regular appointments over the coming weeks. The vet is great, though. Lol, I took to him right away when we walked into the exam room and he'd just finished loading an assortment of treats onto the exam table :) Next step for me is to research Robaxacet (the muscle relaxant he wants me to give her before our next appointment, because Mika had a couple areas of muscle spasms).

Oh, he also doesn't think Mika has any problems in her joints that I should be concerned about, unlike our regular vet who suspected possible minor arthritis. I didn't mention about Mika's joints cracking when she changes positions though (this is why our regular vet suspected arthritis). I myself am not sure that cracking is a sign of arthritis, as I've read articles that say it's something normal that can happen with aging but doesn't necessary mean that the individual is experiencing discomfort. I'll discuss this with our chiro vet next time though.

Yesterday Mika experienced a short period where she showed no lameness at all in her front legs. Woot! She went back to a very slight limp later, though (like she had before the adjustment).

And yesterday I brought Wall-e in to get his B12 injection (like I mentioned in a previous post, our regular vet thinks he has low B12). He'll be getting this 4 times a year.
Posted by Natasha at 8:32 AM No comments:

Hi there! It's good to see you stopping in at my blog. On Dream Dogz, I write about my two active dogs' agility training and trialing, and share all of the lessons I learn along the way. I also occasionally talk about our progress in dealing with my dogs' specific "challenges" that we are slowly, but surely, overcoming together (specifically, Mika's dog reactivity and Wall-e's fear of constant noises).

I hope you enjoy your time here!

What I ramble about